Strawberries are one of the first fruits to ripen in the late spring and early summer, followed by rhubarb. Washington State has a $49 billion agriculture industry, and there are plenty of places to pick your own fresh fruit if you’re willing to drive outside of the city. The sweetness of the strawberries complements the tartness of the rhubarb, so when my friend gave me a big bag of rhubarb from her parents’ farm, I had to find some strawberries to go with it. 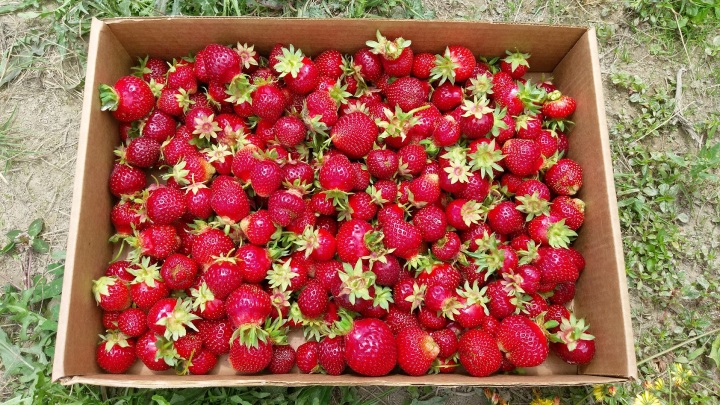 We went to Bolles Organic Farm that’s just outside of Monroe, WA. The organic farm is home to several large U-pick berry fields of strawberries, raspberries and blueberries. I managed to pick 5 pounds of strawberries, which are now washed, trimmed and in my freezer waiting to be used.

Modifications, Testing and Recommendations: If you are using frozen fruit, thaw them in a colander so they don’t add too much liquid to the batter. Rhubarb is easier to cut along the stalk rather than against the tough fibrous strands that support it, similar to celery.

I made these muffins a couple of times – like I said, I have 5 lbs of strawberries to use – so I can definitely say that you don’t want to use paper baking cups. If there is exposed fruit on the sides of the muffin, it will make the paper soggy during baking. Muffin tins are a pain to wash, but it’s worth it. And when the recipe says to fill the tins up to the top, they mean it! This creates the crunchy muffin top, which is the best part.