I wanted to explore Southern cooking, but I’ve never actually spent time in the region. With the help of my sister-in-law who was raised in Alabama, I’ve been learning the finer points of how to cook foods that you’d find in kitchens from Texas to Virginia. In fact, that area is referred to as the “grits belt” of the United States because the food has become such a vital part of the region’s cultural identity, and Georgia has even named it the official “prepared food” of the state. Grits are typically a breakfast food, although shrimp and grits became popular for dinner sometime in the 1980’s.

This dish is a combination of a couple of recipes recommended by people; the recipe for grits comes from Georgia-born Paula Deen (arguably the queen of Southern cooking) while the recipe for the shrimp was created by Bobby Flay. The shrimp was originally supposed to be cooked with bacon grease so I had to improvise to make it suitable for vegetarians. Here is a handy guide to measuring and substituting bacon in cooking.

Cornmeal is widely used across the world under many different names and varying degrees of coarseness. The cornmeal porridge is called “coo-coo” in Baja, while Italians call it “polenta” and people across African call it “ugali.” Grits as we know them today originated with the southeastern Native Americans, who used a stone mill to grind corn and give it a gritty texture. Corn hominy was a form of currency in the region, so this technique was widely used. Grits were a staple food for the American slaves descended from West Africans, who would often catch shrimp and fish to cook with it.

“Grits are hot, they are abundant, and they will by-gosh stick to your ribs.” – Janis Owens 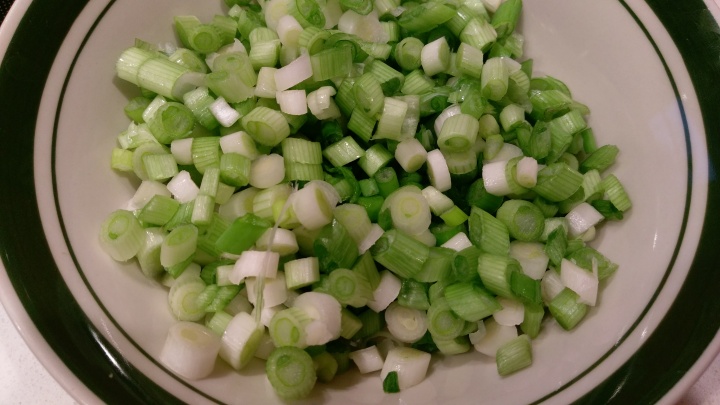 Modifications, Testing and Recommendations: There was a moment, while I was cooking this recipe, where I was frantically stirring two separate pots on the stove with both hands, trying to simultaneously keep the grits from exploding upwards in molten bubbles onto my bare arms, while also keeping the shrimp from being over-cooked. I am very thankful that  no one else was in the kitchen to see this. My advice would be to carefully plan every step in accordance with each other, but because everything must be served hot, you will need an assistant. An extra set of helping hands, even with a simple task like spooning the grits into serving bowls, is a huge help.

Despite my multi-tasking difficulties, the food was amazing. The cheesy grits can also be made on their own for breakfast. I couldn’t find a suitable vegetarian bacon so I substituted crumbled veggie sausage, but I’m sure that a wide range of options would fit with these ingredients. The recipe serves four people, but if you live with very hungry individuals who constantly amaze you with the volume of their meals, this recipe will serve three.