I have been a vegetarian since 2005, with the exception of deliciously fresh Pacific Northwest seafood. When I go to a new restaurant that has a veggie burger on the menu, it’s usually what I’ll end up getting. Ordering something simple and universal at a variety of places makes it easier to find new twists that each chef has added to make it their own. Are the patties made in-house from scratch? What kind of bread is it served on, and what garnishes and sauces come with it? But despite sampling nearly every veggie burger that crosses my path, I’ve never tried to make my own – until now! 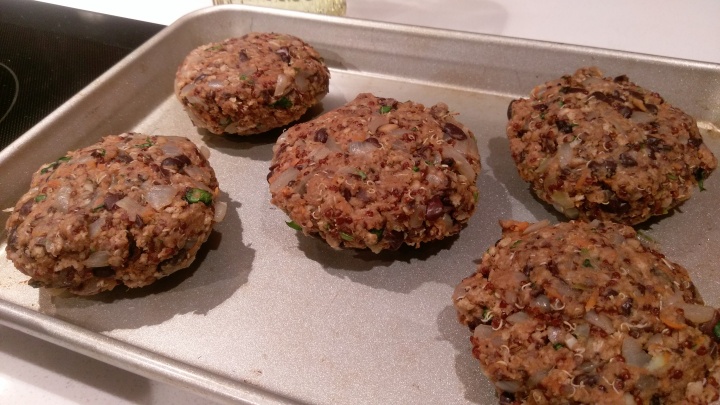 The Bold Vegetarian Chef: Adventures in Flavor with Soy, Beans, Vegetables, and Grains

Like many of the vegetarian cookbooks I have, I can’t remember how it came to live permanently in my bookshelf. At the time of publication, author Ken Charney was working as a chef at PCC Community Markets, a Seattle-based chain of co-op grocery stores that partner with local farmers and producers. PCC began in 1953 as a food club composed of 15 local families, and has grown into 11 storefronts across Washington state with another scheduled to open this spring. This cookbook spans a huge range of food and should be a staple for anyone who love fresh, natural ingredients but hate boring food.

This recipe for sweet potato and black bean burgers looked delicious, and seemed fairly easy for my first attempt at making veggie patties. The original recipe called for a roasted yellow pepper sauce, but I decided to try the mango avocado salsa from a different section in the cookbook. The sweetness of the mango and the acidity of the lime juice and red onion in the salsa worked really well with the burgers. They both used a lot of the same ingredients, like onions and cilantro, so I knew they would pair well together.

“No one is born a great cook, one learns by doing.” – Julia Child 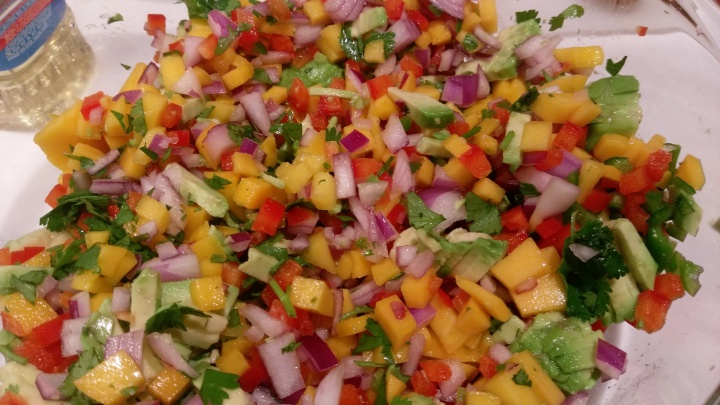 Modifications, Testing and Recommendations: There are a few things that can be prepped ahead of time to make assembly a little bit easier: I roasted the sweet potato the night before because cooking, peeling and mashing it takes about an hour. Also the quinoa should be cooked before you start. Make sure you have a potato masher handy, it’s difficult to get the right consistency without it. I couldn’t find any peach vinegar for the salsa, so I used pomegranate balsamic vinegar instead.

Get the recipe here! I might have made my burgers on the small side because the recipe said it will make 8 but I ended up with 8 1/2. I was surprised how easy it was to form the burgers and that they actually stayed intact when cooking! I expected them to fall apart in the pan. Unfortunately they probably wouldn’t survive being cooked on a grill outside. The cornmeal that I coated the burgers in before cooking added a really nice crunchy finish to an otherwise-soft burger (toasting the bun is also a nice touch). My roommates went back for seconds, and were surprised when I told them that the recipe was entirely vegan. 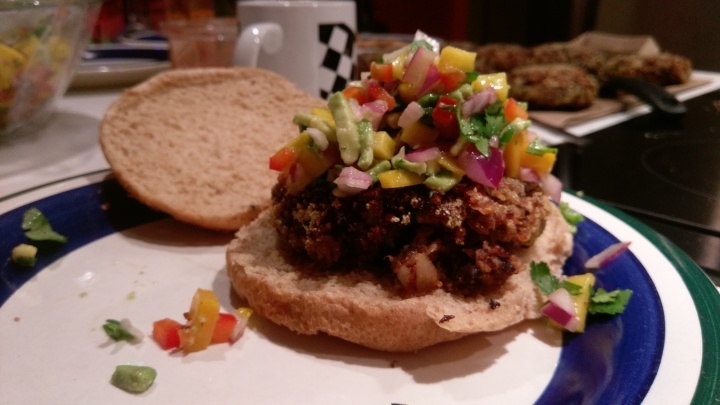