This pad thai doesn’t come from a proper cookbook, but it comes from my notebook where I keep recipes that I’ve torn out of magazines and newspapers, photocopies, printed out and written notes on, or jotted down on the back of receipts. The notebook has no order or theme, it’s just a jumble of flavors that looked good to me. It’s my favorite cookbook, and after many years, it’s fairly hefty with some favorite dishes. But there are a lot of dishes that I still haven’t tried yet.

Rice has long been an integral part of Thai cuisine, so much so that a common Thai greeting translates literally to, “Have you eaten rice yet?” Some traditional dishes can have as many as 30 different varieties of rice in them, although genetic modification has reduced these numbers in recent years. But during World War II, Thailand’s rice crops were mostly destroyed by war and floods; Prime Minister Plaek Phibunsongkhram launched a government campaign to reduce domestic rice production and Chinese wheat consumption by promoting eating noodles instead. He introduced a contest to create a new national noodle dish, and the winner was remarkably similar to the pad thai we eat today.

This pad thai recipe is very easy and straight-forward, and it turned out great! Make sure you have a large wok if you are making more than 2 servings; I made a triple recipe for five people. I couldn’t find pad thai noodles or sauce at the store, but fortunately I found a Thai Kitchen pad thai noodle kit, which included just those two items. Make sure to prepare the noodles according to the packaging rather than the recipe. If you have a vegan pad thai sauce that doesn’t use fish sauce, and you omit the egg, this recipe can be made vegan.

“Thai food ain’t about simplicity. It’s about the juggling of disparate elements to create a harmonious finish.” – David Thompson 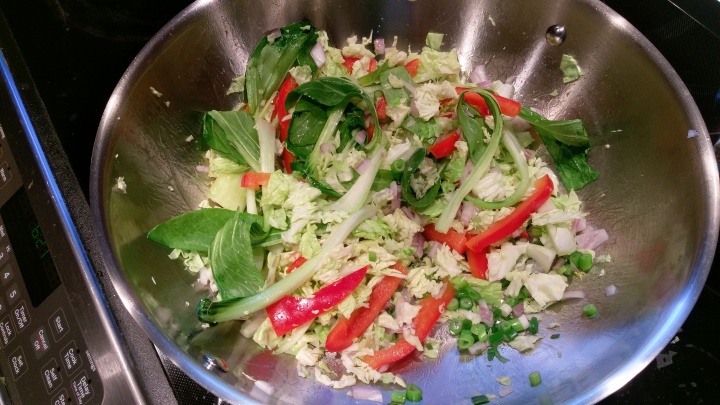 I loved this recipe because it has plenty of vegetables and just enough heat. Remember to press the moisture out of the tofu before cutting it into cubes and adding it to the wok. I was initially worried that adding too many things into the wok at once would keep them all from cooking properly, but the green beans, noodles and eggs were cooked separately and added into the vegetables afterwards. The ratios of ingredients can easily be scaled up: there wasn’t a problem with making a triple recipe all at once. It’s helpful to have a metal spatula to ensure that the noodles don’t get stuck to the bottom of the pan while cooking and everything gets tossed together evenly. 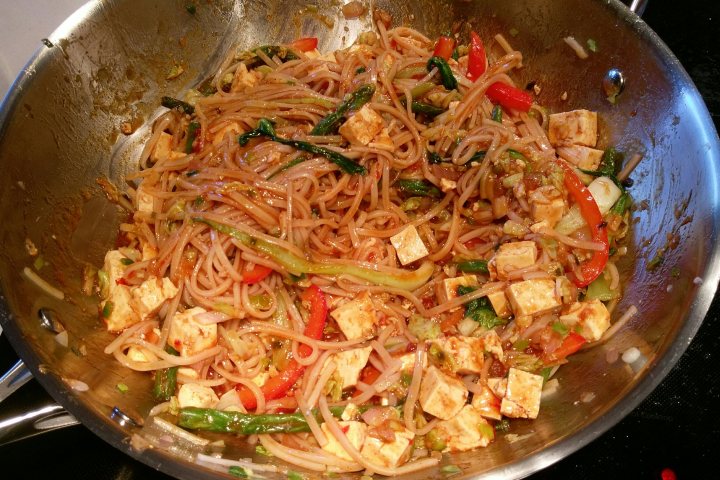